The last day of my speed creating project and I wanted to do something that I had a strong feeling could be a total failure but still a hope it might just work. I have no idea how this idea arrived in my head but the plan was this. Buy crisps (chips) crush them up, add a little water and form into a little man, then inflate the crisp packets with helium, tie them to the man and let him fly away.

Anyway I had some packets left over from the day before and started making a little man and his son incase he was too heavy. 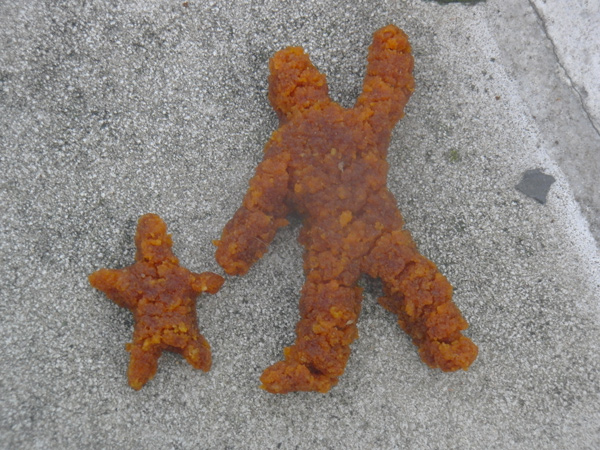 Then I found a newsagent shop that inflated birthday balloons for people.
Dominic: Hello do you sell helium?
Shop keeper: yes, what balloon do you want?
Dominic: Well actually I want to inflate a crisp packet.
Shop keeper: a what?
Dominic: Crisp packet
Shop Keeper: Not possible ( This is a regular answer to my questions by people)
Dominic: Why?
Shop keeper: The helium will just pass through the packet. (Helium is thinner than air and can just go through certain materials)
Dominic What even the metallic ones?
Shop keeper: hmm don’t know.
Dominic Can I try?
Shop keeper: Hmm yes.

As you can see in the video the packet just sank to the floor. undeterred I bought some multi pack packets as they are bigger and lighter. On returning to the shop they were too busy to help so i found a florist and went through the explanation again. This time the assistant was a tough looking man who was saying that it would be expensive and there would be lots of wasted helium. I thought ‘I’m not asking you to fill up my Zeppelin parked outside.’ I ignored him and found another assistant called Kevin who was very helpful.

It worked and my crisp packet was flying around the florist. 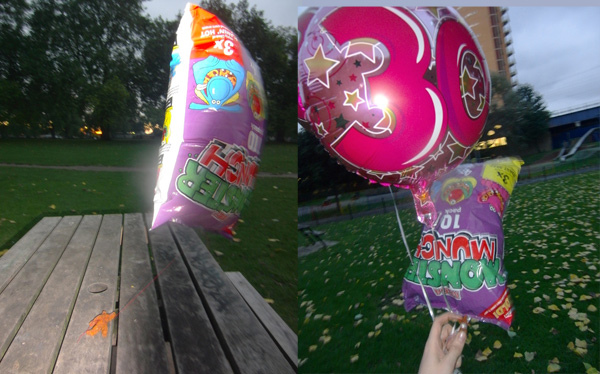 The other 2 packets I bought didn’t work so it was a bit of a failure in my attempt. I needed some extra lift to get my man in the air. However determined to end on a high (!) I bought two balloons to celebrate the 30th day of my Speed Creating project.

The crisp man was carried far into the distance heading in an easterly direction. I hope you have enjoyed following my 30 days of Speed Creating I am going for a nap now.

This is part of a 30 day Speed Creating project I am doing. Outcomes were exhibited at the Anti – Design Festival between 18th-21st September, Mestakes and manifestos, curated by Daniel Charny, Londonewcastle gallery, 28 Redchurch St, London. You can follow my progress on Twitter and Facebook, Click here to view all the days so far in a row.