As part of the Making Together exhibition in Milan I had invited the public to donate sticks of all types and sizes which I planned to tape to a chair and build a network of sticks during six days of Milan design week. It was to be an improvised creation where I would decide how it would grow while I was making it. It’s quite exciting to start from nothing and not be sure what is going to happen, particularly when in front of an expectant on looking audience.

The chair and some sticks were waiting for me when I arrived with my tape.

I started attaching the sticks to the chair. 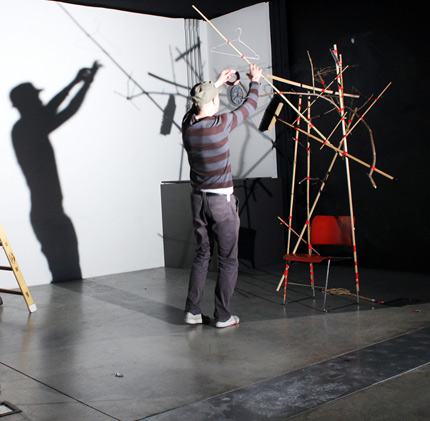 I placed a spotlight I found at the exhibition and pointed it onto the white wall to create shadows.

Half way through week.
The idea I came to Milan with was to build a bridge of sticks between two chairs but I changed my mind and wanted to build on one chair with only the legs of the chair touching the ground. I wanted to see how far I could push the strength of the tape and balance of the chair. 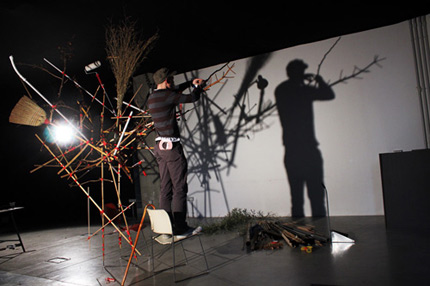 I decided to draw the shadow onto the wall with the same tape.

Me in the sticks.

On the third day I was told that the chair had toppled over in the night and so I strengthened with more tape. I added a chair on one side to try to balance out the weight.

Sometimes I would come into the room and some members of the public were attaching stick to the ‘tree’. This wasn’t part of my plan but I was tempted to see what they did. Collaboration with the public can be interesting but it is important that they understand the rules and restrictions of what needs to be done. I ended up having to remove the 5 or 6 additions as they weren’t strongly taped or in the best positions for a good structure. I decided to continue with just me adding things but the public bringing the sticks throughout the day.

The shadow moved continuously due to the weight of new sticks being added, but I just drew over the new shadows. 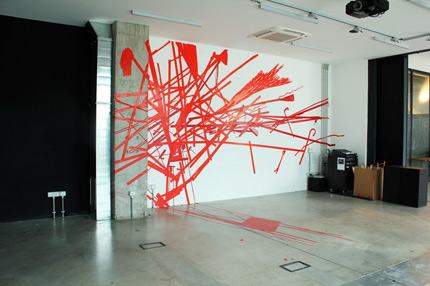 At the end the stick structure was moved to a new room leaving the shadow drawing as a permanent piece.

You can see my pre-plan post here
See the other project I did in Milan, a competition against a 3D printer to make a cathedral, man vs machine here.